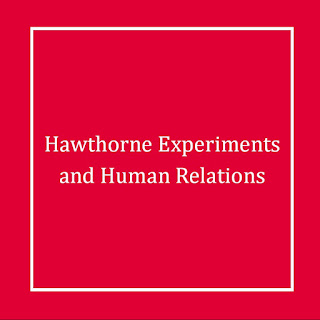 Ø  Reasons for human behavior at work

Ø  Real cause of human behavior

Ø  Study the relationship between productivity and physical working conditions

Ø  Four phases: each phase attempting to answer the question raised at the previous phase

o   Illumination Experiment (1924-27): experiment to determine the effect of change in illumination on productivity.

o   Relay assembly test room experiment (1927-28): experiment to determine the effects of changes in hours and other working conditions on productivity.

o   No impact of light intensity on productivity

o   Observer, girls were consulted before any changes

o   Changes and their result:

§  Incentive scheme: extra pay on the productivity of small group (other 5 girls output)

·         The productivity increased as compared to before

§  Rest period was reduced to 5 Minutes but frequency was increased

§  Development of attitude towards work, feeling of stability , sense of belongingness , freedom, responsibility and self-discipline

o   14 male workers, functioning of small group and its impact on individual behavior

o   Average wages on the basis of group output (Bonus)

o   Hypothesis : workers would produce more and in order to the advantage of group bonus (Earn more)

o   Workers decided target for them, less than company’s target

§  Fear of unemployment: more production/ head, some workers would be put out of employment

§  Satisfaction on the part of management

o   Group set certain norms, including personal conduct, employees create groups which may be different form of their official group

§  Workers can be explained

§  Participation of workers in decision making and problem solving